I really enjoyed this next interview with NYC-based Keval Amin and Nikhil Jhunjhnuwala. They're already on project number three of what I'm sure will be many more exciting law startup projects to come.

Tell me about yourselves
We’ve known each other since fifth grade, since we lived a couple of houses away from each other. I think we met on the school bus. We also both went to Rutgers together, and then parted ways—Keval went to design school, and Nikhil went to law school at USC. Keval’s original idea was to do industrial design for things like plates and silverware. While learned about that process, he learned about how business works. Nikhil was in law school for his 1L year and realized that the law isn’t very complicated—it just needs to be simplified for lay people. I know you guys have a lot of projects going on, so tell me about those.
In 2011, our first company was MyRight—a WebMD of law. WebMD has a symptom checker, and Nikhil had this idea of seeing whether the common person could put in symptoms and get an answer. Through talking to Keval, we were able to synthesize something real.  We got into StartEngine, an LA accelerator program, for that, and were able to get cash and mentorship to shape the company. We were too ambitious though, and really needed more cash than we’d originally thought. After the technical cofounder left in January 2013, we decided to pivot.

We then started LegalCrunch, an expungement service. For those unfamiliar with expungement, if you have a criminal record, expunging the record essentially clears criminal history from public record. We developed in a matter of weeks an automated system where people with criminal records can take an eligibility test using several factors to determine whether we can help them with their expungement. If so, the system will generate paperwork for the customer to sign and mail. In less than a year, we’re already generating revenue with LegalCrunch in just New Jersey and Ohio.

Recently, we created Legitimo, a mobile app targeting the Spanish-speaking population that helps people do contracts. It came randomly—we had just moved to New York, and there was a Spanish-language themed hackathon sponsored by a Latino organization. We wanted to get involved in the startup scene, so we showed up and came up with the idea at the Hackathon. The app can create a simple contract in under a minute in both Spanish and English. 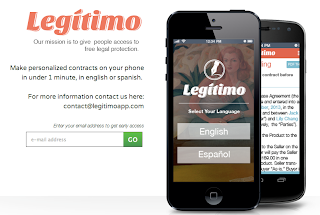 Legitimo is Spanish for “legit.” In our market testing, the latino community would read our company name and understand it. In fact, our tagline is “it’s legit.”
We’re targeting a demographic that tends to be a cash-based community that really needs legal protection. When Nikhil was in law school he used to volunteer at several legal aid clinics, and anyone who spoke Spanish was an invaluable asset.

Tell me a bit about what you learned from the MyRight experience.
We learned so much, it’s hard to know where to begin. By far, we learned that failing is not a reason to stop doing what someone is really passionate about. We could have quit when our tech cofounder left, but we’re passionate about legal innovation and creating a company. After just one month of LegalCrunch, we were already making small amounts of revenue. We also got a lot of perspective—there’s lots of room for innovation in law, but it’s also more difficult to introduce that innovation than in other industries. Lawyers and bar associations push back, and you have to deal with lawyers who are litigious by nature. But despite all the obstacles, we still stay because of the potential for impact and change.

Now that you’re done with MyRight, do you think a WebMD of law is feasible?
I think it’s feasible. It takes a lot more investment of resources and energy than we initially thought it would. MyRight is something we’d like to put out there and integrate with something we do in the future. It’s not very far-fetched or crazy technology. Others are doing something similar in a narrower sense. Our biggest weakness was that we lacked a business model—we were giving people free information, but there was no solid business plan at the time, so we had to pivot. Whereas with LegalCrunch, we put a website up and created a kit in a few weeks without too much planning.

Expungements have a very narrow target market. How do you advertise?
We’ve learned to respond to the things our target demographic looks for. Whereas MyRight targeted a board range of legal topics, LegalCrunch is narrower. We write articles to be ranked in SEO by Google, and are also using Pay Per Click (PPC). We also partner with lots of lawyers—usually solo practitioners.

Are you looking to expand into other topics aside from expungement?
Maybe later. We’re using expungement as an entry point into document automation, but there’s already a lot on our plate.

Why did you start off in New Jersey and Ohio?
We’re from New Jersey. Ohio recently passed an expungement law that made more people eligible than before, so it was a good opportunity.

How does UPL figure into your startup?
You have to address UPL if you are a law startup, but we’re not practicing law. We are an information service and document preparation service.

What’s been your greatest challenge?

In a startup, you have to wear a lot of different hats, play lots of different roles, and you’re always thrown in to something you don’t know anything about. It’s not easy. Also, in law, there’s not a lot of leeway to do innovative things. It’s hard to market law and it’s not very fun. All the other legal websites out there try to create an aura of credibility or authority, but that’s not really in line with our personality. We want to make law accessible, not intimidating or scary, but it’s hard to change people’s perceptions. There are surveys out there in which 70-80% of consumers have a negative reaction when law is mentioned. We try to position LegalCrunch to instill some confidence in consumers, but still have dinosaurs and fun characters on the website to give people a sense of comfort.

Conversely, what’s been your greatest success?
There are so many tiny wins, but to us, they’re huge wins. Little milestones add up. For example, we were thrilled when we got our first customer, and when we helped clear our first person’s expungement. People have come to us and said, “you are my only hope. I can’t afford a lawyer.” We try the best we can without committing UPL by being a helpful resource. A number of people have told us that they didn’t know where else to turn to. They were so grateful, and those thank yous are very motivating. We’re also thrilled we’ve been able to gain credibility in just a few months. Government agencies, probation officers, and unemployment offices have started to refer customers to us. It’s slow, but it’s happening.

Any advice to aspiring legal entrepreneurs?
Don’t give up.  You’ll probably fail a lot and get frustrated, but the more failures you have, the more you success you may have in the future. There are a lot of obstacles in this field, but you’re making real change. It’s easy to make a social app or cat website, but its more fulfilling and challenging to be in this field. We need more legal startups out there.

How have you two managed to sustain yourselves financially throughout this process?
We had about 9 months worth of investment money for MyRight. We moved back home to sustain LegalCrunch, though eventually moved to (and currently live in) New York City, which has afforded us a number of opportunities in the law tech space, including starting Legitimo. For those contemplating doing a regular job or side job, make sure its something easy that you enjoy, since you’ll be doing that 9-5 and still have to come home and work some more. Don’t do something you don’t care about. Many people with side jobs still work in law during the day. We also have moved home. It’s not too bad. It’s best if you have a clear vision. You really get to understand who you are as a person. You’ll have a lot of doubts, and there will always be mornings when you wake up and ask, “why am I doing this? I could have been normal.” It’s easy to give up, but we want to let others out there contemplating a law startup that it’s okay to move up and give up a normal lifestyle.

Nikhil, any plans to return to law school?


Maybe. It’s not something that’s out of the question. I’m not sure I’d practice law, but I wouldn’t be opposed to just finishing the degree.
Posted by Amy Wan at 8:27 AM